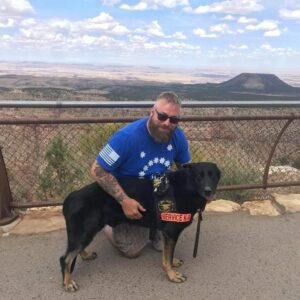 “Emperor saves my life every day, he is my four-legged angel that gives me hope and strength to make it to the next day”

Emperor is a Navy Seal Team 3 veteran who served our country in Iraq and Afghanistan as a bomb detection and personal protection contracted working dog (CWD).  He is credited with finding approximately 150 caches of weapons and IEDs as well as saving countless lives during his tours.

Emperor was seriously wounded in 2011 during an ambush attack on his unit, unfortunately, his handler was killed.  Emperor engaged in the fight and was credited with dispatching three Al-Qaeda operatives and wounding a fourth.  His injuries were so severe that he would have been put down in the field if not for his team’s insistence that he be treated as any other wounded U.S. soldier.   He was retired and for his actions, his team awarded him a Bronze Star and a Purple Heart.  After returning to his trainer in Colorado, he was fortunate to be repurposed as a registered service dog who now alerts Laszlo of impending seizures and PTSD social issues.

Laszlo is a combat Marine veteran who served our country for 18 years.  His tours took him to multiple countries, and he also provided service to the Intelligence community.  After leaving the military he obtained his education degree teaching career technical education and mechanical engineering.

In 2012 Laszlo was seriously injured in a motor vehicle accident and was diagnosed with a traumatic brain injury, seizure disorder and PTSD from his time in combat.  The injuries took away his ability to be employed.  His interest in metal work began at an early age in the family business.  Following his traumatic brain injury, Laszlo returned to supervised metal work as a therapeutic way to give back to veterans, first responders, contribute to local fundraisers and promote the use of service dogs for persons with disabilities.  His hope is that through artistic expression he can help others to appreciate the sacrifice of those who provide service to our country, educate the community on the challenges of living life with a disability and the benefit of service dogs, as well as raise funds to assist veterans with maintenance expenses for their service dogs.